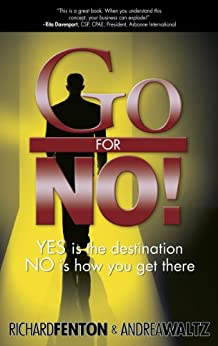 Sticks and Stones May Break My Bones but “NO” Can Never Hurt Me!

That’s the lesson twenty-eight year old copier salesman Eric James Bratton is about to learn. And he’s going to learn it from the most unlikely of mentors – himself!

Imagine going to bed one night, then to awaken the next morning in a strange house with no idea of how you got there. Only this house doesn’t belong to just anyone – it belongs to you… a wildly successful future version of the person you might one day become, providing you are willing to start doing one simple thing.

Before the weekend is over Eric will learn…
– What it takes to outperform 92% of the world’s salespeople
– That failing and being a “failure” are two very different things
– Why it’s important to celebrate success and failure
– The five failure levels and how to progress through them
– How to get past failures quickly and then move on
– That the most empowering word in the world is not yes… it’s NO!
… And much, much more!

These lessons are destined to change the way he thinks, the way he sells, and the way he lives forever. And they’ll do the same for you!